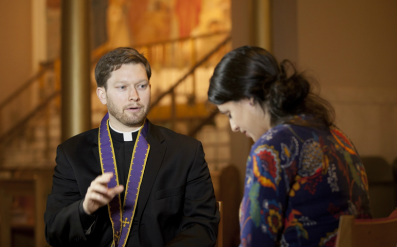 The Sacrament of Reconciliation is one of the most beautiful and unique aspects of Catholicism.  It was established by Christ as a means by which God forgives our sins: "If we confess our sins, he is faithful and just, and will forgive our sins and cleanse us from all unrighteousness" (I Jn 1:9).  The Church's authority and mission to forgive sins was imparted by Christ told his ministers, "As the Father has sent me, even so I send you... Receive the Holy Spirit.  If you forgive the sins of any, they are forgiven; if you retain the sins of any, they are retained" (Jn 20:21-23).  Sin is before all else an offense against God and a rupture of communion with him (CCC, 1850).  The institution of this Sacrament allows the Christian faithful to restore our relationship with God and His Church after those times when sin, whether deliberately or by omission, damages this.  Sin leaves our hearts heavy and burdened, but this sacrament "washes us clean" and renews us in Christ.

A Brief History of Confession:

The spiritual effects of the sacrament of Reconciliation are (CCC, 1496):

For a helpful guide to making a good confession:
The Sacrament of Reconciliation will be available on Sundays, before and after Mass, in Rita Welch Meditation Centre or by request.
Brock Catholic